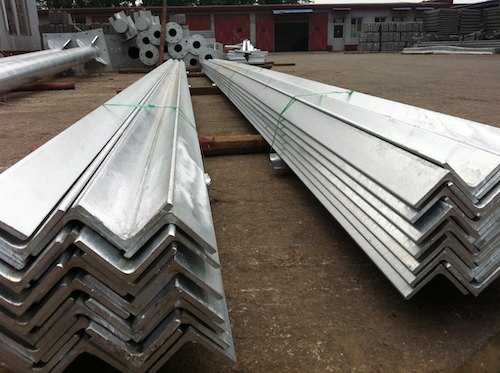 In March 2012 one of our Australian customers visited to??confirm proceedings for putting in an order of Australian standard galvanized angle iron amongst other things. In total they needed 300 tons of angle iron, 100 tons of flat bar and 200 tons of H beam.

During their visit we took them to check out the galvanizing plant we cooperate with in Beijing. This is because they wanted a good portion of their angles to be galvanized here in China with a zinc coating of?????605g/sqm. Their other key priority was that the galvanized angle iron was straight and flat. 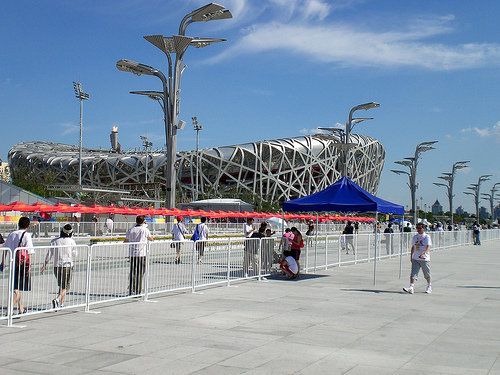 Our cooperating??plant is just a 30 minute drive from our office in Beijing and is run by a wonderful lady called Mrs Wang. Her plant is world class and she in fact galvanized various pieces for the Beijing Olympic Bird’s Nest Stadium.

Unlike the other galvanizing plants you will find further north in China, such as Tangshan in Hebei Province, the Beijing galvanizing plant can ensure the zinc coating meets AS/NZS 4680:2006 standards.

Yes there are many galvanizing plants in Hebei, but even if they say they can achieve a high coating??most of these can only manage a zinc coating of 250 to 300 microns (max). This of course is unacceptable for Australian standards or meeting deep sea specifications.

Armed with a coat thickness testing device we went around some of Mrs Wang’s freshly galvanized angle iron to take readings of the zinc coating. 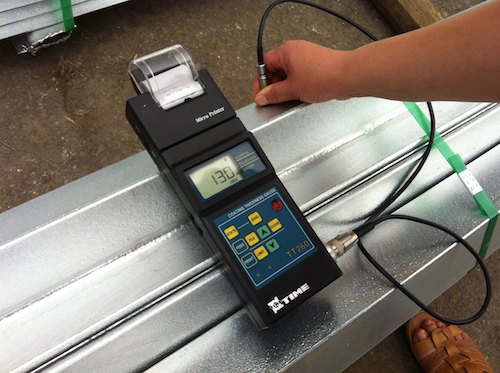 Our customers were satisfied with the plant and a few months later they put in an order for both 6m and 9m length angles to be galvanized in Mrs Wang’s plant.

Our customers have also made repeat orders of Australian standard galvanized angle iron since being happy with the first batch.

The photos below are of our Australian customers’ nine meter unequal angles going through the galvanising process in Mrs Wang’s plant. The photos are accompanied by a small explanation of each stage. The plant has two production lines with one nine and one twelve meter zinc bath. 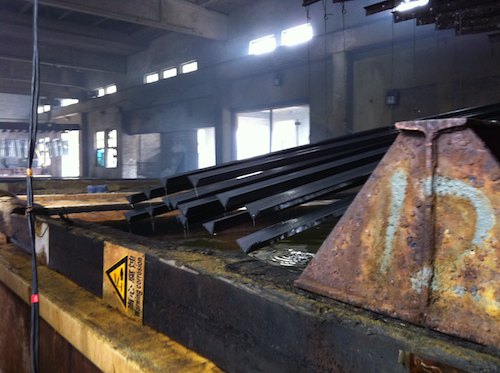 Upon arriving at Mrs Wang’s galvanizing plant, the prime black angle iron is rinsed and pickled in 10% hydrochloric acid to remove scale, rust and other surface oxides. Then it is rinsed in a hot zinc ammonium chloride pre-flux solution to condition the steel surface to facilitate the reaction between the steel and molten zinc. 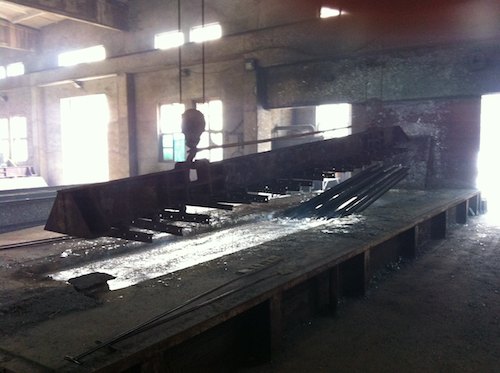 After the pre-flux has dried on the steel???s surface the conditioned black angle iron is plunged into the molten zinc bath and remains immersed for over three and a half minutes (Temperature 455??C) to meet the crucial requirements of AS/NZS 4680:2006. 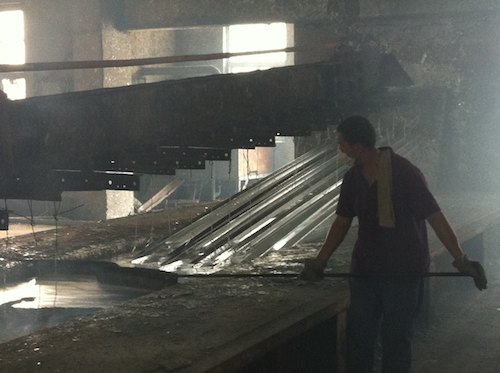 Workers make their way down the length of the bath scooping the dregs off the surface of the molten zinc. 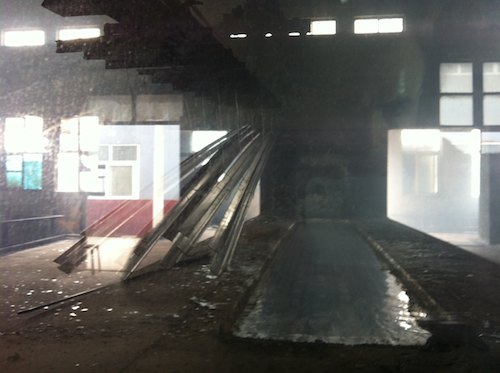 The angles are removed from the bath and swiftly moved over to the cooling bath. 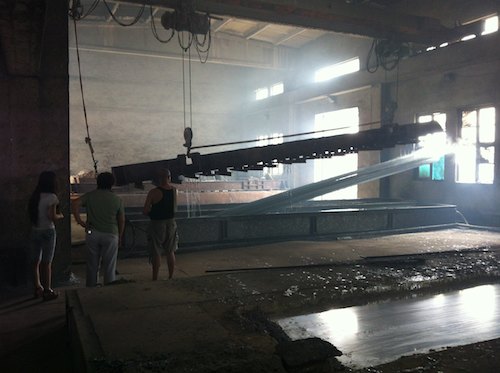 The galvanized angles are plunged very briefly into a bath of water to cool down post??galvanization. 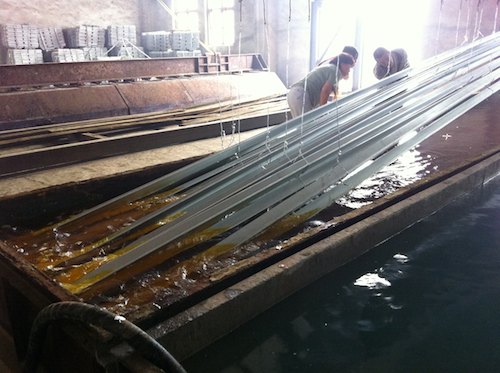 A few seconds later, the angles are quenched in a weak sodium dichromate solution that continues the cooling process and applies a low level of chromate passivation to the galvanized coating???s surface. 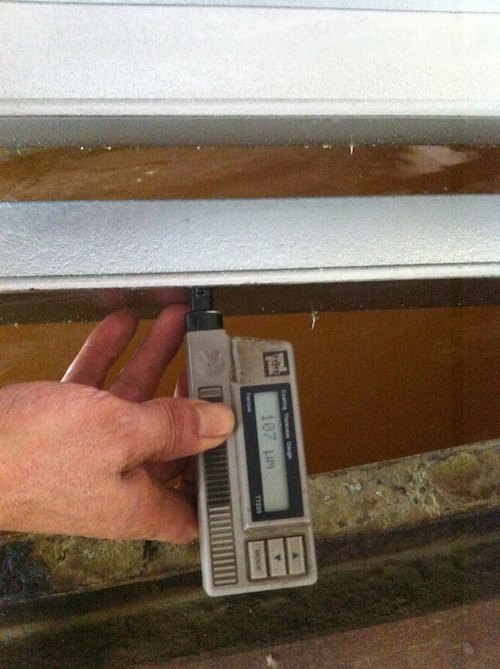 Here???s a reading we took off the surface immediately after quenching. 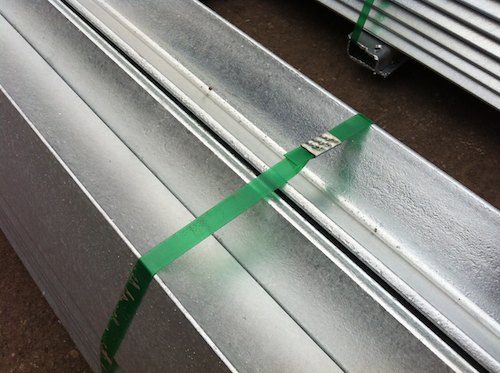 If you are interested in Australian standard??galvanized angle iron visit us in Beijing and we???ll give you a tour of Mrs Wang’s galvanizing plant.