Steel suppliers always play a role of “bridge” between manufacturer and user. Through sales, steel suppliers get a lot of the latest information and intelligence of users, and give feedback to the steel mills at the same time, meanwhile, steel mills can also adjust the production plan and categories to meet market demands better .And customers can also learn information about technology industry and market trends through dealing with steel suppliers .As a supplier, I’ll give you a brief introduction of galvanized pipe and ERW pipe today.

Galvanized pipe has two development phases, the cold galvanized pipe and hot dip galvanized pipe. Due to the requirements of environmental protection, cold galvanized pipe has been forbidden. What we use is mainly hot dip galvanized pipe. Zinc is known as the “skin” of steel, galvanized processing cut off the contact between air and steel pipe, so under the circumstance of anaerobic, steel is not rusty, and extends the service life of steel pipe largely. Besides, Zinc oxide is more intensive to prevent further oxidation. If you keep an eye on surrounding, galvanized steel pipe is used as water pipe and gas pipe, not only for the sake of safety, but also the convenience for construction. Practical application shows that the use of galvanized steel pipe reduce the water and gas waste, since the galvanization steel tube is not easy to broke and cause water and gas leak. Galvanized steel pipe can also be used in petroleum industry; it is very sensitive in the field of detecting oil, because the anti-interference function of zinc coating is very strong. A lot of heating pipes take galvanized pipes as materials. Of course, in the respects of machinery, coal, chemical industry, automobile industry, highway, container, and agricultural machinery manufacturing, galvanized steel pipe can often be seen .At the end, for the daily life, here is a little cleaning tips, do washing off rust with dilute hydrochloric acid.

ERW pipe (Electrical Resistance welding pipe) is a welding way that by taking the electrode pressure after the work piece combination to generate heat through touching with the surface and close region of work piece, with the characteristics of high efficiency, low cost, material saving , easy automation, etc. It is widely used in water supply and drainage engineering, petroleum engineering. It also can be used as pile pipe, structural pipe in the field of bridge, docks, roads, building, etc. With the development of aerospace electronics, automobile, household electrical appliances, ERW pipes are increasingly widely noted.

Above are what we mainly introduced today. Steel pipes are with numerous categories, and it may be difficult to understand all of them. But never mind, our sales team will be patient enough to help you. So contact us if you have any questions.

U.S. Imports of All Steel Mill Products from China

According to SIMA (Steel Import Monitoring and Analysis) ‘s report. The United States imports of steel mill products from Chinese steel suppliers greatly over the past few years.

Here is a graph from SIMA, US Department of Commerce for your reference 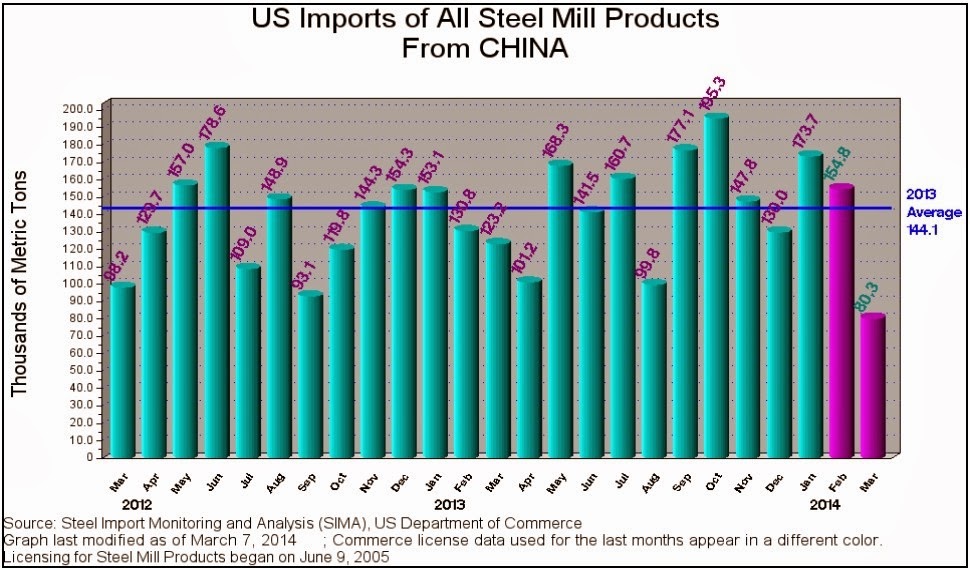 Figure - U.S. Imports of All Steel Mill Products from China

Based on the latest data from the NAFTA countries, the imports from China’s Steel suppliers into NAFTA countries decreased 9.5% , 225.7 thousand metric tons in total.

According to the Graph below we can know that:

As a professional One stop Steel products supplier since 2002, we, Sunspeed Imp & Exp co.,ltd, will always be here waiting for providing you our best solutions. What we can offer you including: Galvanized Steel, Galvalume Steel, Prepainted Steel, Hot Rolled Steel, Cold Rolled Steel, Angle Iron, Galvanized Angle Iron, Flat Bar, Steel Channel. Please contact us to get what you want.

The best way for anti-rust of steel is hot dip galvanizing and galvalume. Galvanized steel and Galvalume steel is becoming more and more popular in modern building market to fulfill our daily life. Among so many China steel suppliers, Steel from China performs outstanding for the qualified products and good service it services.

Galvanized steel is steel that has gone through a chemical process to keep it from corroding. The steel gets coated in layers of zinc oxide because this protective metal does not get rusty as easily. The coating also gives the steel a more durable, hard to scratch finish that many people find attractive. For countless outdoor, marine, or industrial applications, galvanized steel is an essential fabrication component. Galvanized steel can be found almost everywhere. Many individuals live in steel frame houses, and buildings are often made with galvanized steel roofs. There are multiple steel parts in cars that help protect them from the weather, and it’s used in many marine applications due to its ability to withstand the salt and the elements. Besides being inexpensive, durable and effective, this metal is also popular because it can be recycled and reused multiple times.

Galvalume sheet steel is a 55% Al-Zn coated sheet steel product that is ideally suited for most types of roofing and siding applications as well as unexposed automotive parts, appliances and miscellaneous applications like furniture, outdoor cabinetry, computer cases, gutters, pipe, etc. Since 1972, over 100 million tons of licensed products have been produced globally. Galvalume sheet steel continues to gain approval by specifiers, architects, building owners and many others due to its versatility, ease of use, aesthetics and long-term performance.

If you are looking for information on where to buy Galvalume coated steel for commercial, architectural or industrial applications to build your hometown, please visit the link on the www.steelfromchina.com website. We will make you a big surprise.

1. Low processing costs: the cost of the hot-dip galvanized anti-rust coating is lower than any other paint Coating;

3. Good reliability, the galvanized layer is metallurgical combined with steel, which become a part of the steel surface, thus, the durability of the galvanized coating is more reliable;

4. The high toughness of the galvanized coating: the galvanized layer can form a kind of special metallurgical structure which can bear the mechanical damage when in transporting and using;

5. Comprehensive protection: each section of the work piece can be plated with zinc, even in the cavity, sharp corners and hidden place;

6. Time-saving and labor-saving: the galvanizing process is faster than other coating construction method, and this can save the time for painting after installation on site.